A funny thing happened on the way to work this morning!

I have been going to work by taxi since my foot operation and I needed change to give to the driver so I nipped round to the local shop to get some change.  On my way back I was accosted by the veg shop owners who called out did I still want any Victoria Plums!  I ended up buying the box and a box of greengage as well so it looks as though jam making is well and truly on the cards this week as well. 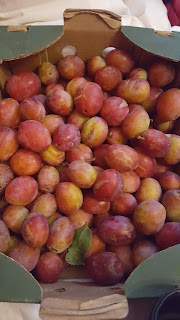 I love Victoria plums, probably because they are the variety that my grandparents used to grow and we used to pick or scrump them off the tree when we visited.  The Victorias and the Black Diamonds.  We were taught to be wary of the wasps as well and to survey the fruit all the way round before picking it.  Nan always used to stick some jars with water in and a blob of jam to keep the wasps off the fruit hanging them off the lower branches and we used to help make those up when we went as well.

OH has had a few of the Victorias to eat as they are also one of his favourite fruits.  He is partial to a plum or two. 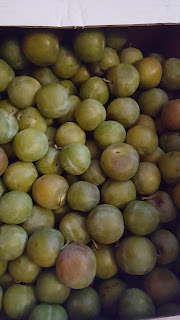 I also have the greengages which I like as well so greengage jam is definitely on the cards.  Looks as though I am going to be busier than I envisaged.  Oh well it will keep me out of mischief or get me into it one way or another.

I most definitely want to bottle some of the Victorias as I want to use them to make sugar plums for Christmas.

Something else for the pantry shelf.  I did plum wine the other day and I have peach wine to make later on this evening.

Its all good stuff with no nasties in.  Its good to be independent and not overly rely on others to supply everything to you.

I need to do some work over these winter months to sort out some semblance of a kitchen garden for next year as you really cannot beat home grown veg in the bigger scheme of things.  However I am a big believer in making use and taking advantage of anything that comes your way.

Right had better get a wriggle on if I am to get a sit down before going to bed this evening.  I am tired so I do not want to be too late.