Flavourings and Seasonings and Vitamin C

Tiger shop is brilliant for spices food mixes, sold by the bag and normally £1 a time.  They do have some unusual mixes and it varies from time to time what they actually have in at the particular time you are there.

Today  (Saturday)I have managed to obtain the following: 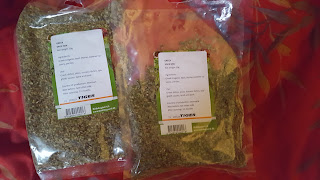 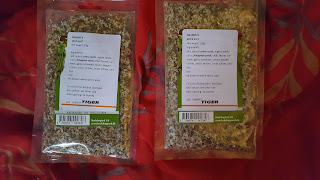 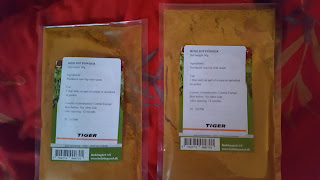 I also have Herbes de Provence, Marjoram and a Greek Salt mix (which I have not photographed yet) as additions to my spice cupboard/Pantry

I have also got fresh thyme, fresh tarragon, fresh chives, garlic and chillies to do something with.  All these things add a little bit more flavour to everyday cooking. The garlic is pungent and strong and came from M & S and very large bulb.  I have four of these bulbs I may get some more and put them for the winter months as they are lovely and pungent.  I may also make aioli to use as a salad dressing during the week (It can also be used to dress soups).  I use garlic a lot.  This garlic is that full of flavour in that I am going to make my own garlic butter.

We have herbed chicken for tea which I am looking forward to and some of these cloves will go in with the chicken and then we have separate stuffing and chippolatas and home made bread sauce together with roasties, and fresh veggies.  Hopefully I will get at least two or three servings out of the chicken and then of course there is the carcass with which to make soup stock and freeze.

The fresh chives have been snipped into ice cube trays and popped into the freezer for a little touch of summer in the middle of winter.

I managed to get some more ground cloves the other day which together with a couple of whole cloves I use when I make the bread sauce together with white and black pepper, a little thyme, bay leaf, onion and milk and of course bread crumbs.  Either fresh or home dried.  Then there will be veggies but I always aim to give maximum flavour with the meat itself and/or the gravy/sauces.  The right ones often bring out the best in the meat.

The chillies are going to be used in sweet n sour chilli sauce.


I already have plenty of Tarragon vinegar which is the secret ingredient in my home made prawn cocktail sauce along with a little cayenne.  I have a large jar of this macerating. Basically it is two to three bottles of good white wine vinegar popped into a large sterilised preserving jar.  The fresh tarragon is then stuffed in and then if still above the vinegar line more tarragon is added.  I use the French Tarragon as it has a far superior flavour.  You will probably note that I have covered the top of the jar with cling film.  Vinegar can attract flies and so as I always wipe everything down I do pop the cling film on the top as a safety precaution.  More so as I have wines in the house and I do not want contamination from the little perishers.  Now I have the shed I think the vinegars will be going into the shed as I am also keen on experimenting on making my own vinegar as well. 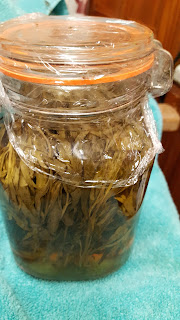 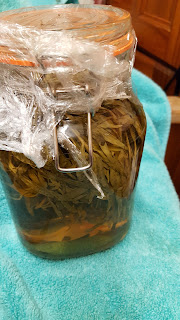 The thyme is drying as we speak whole on the stem.  I am trying to dry this whole naturally so that I can combine into a home made bouquet garni.  A bouquet really does add a lot of flavour to a soup or a stew  and they are relatively easy to prepare oneself.

I also have some onions to use up and I am going to make some jars of burnt onions for gravy which together with the souper paste of River Cottage/Pam Corbin fame which both help to give a lot of dishes with a gravy where you want a layered depth of flavour.

See here for the link to the burnt onions:


See  here for the Souper Paste link and recipe  for those of you who do not have the River Cottage Preserves book by Pam Corbin:


The ground rosehip powder will go in with muesli or porridge of a morning in the colder months to try and keep colds at bay.  I was when the rosehips are ready going to do this in any event myself.  I still intend to do this but it is nice to see this product available.

I have posted previously about Rosehips and this is how I process them.  It is fiddly but it is well worth it.


However now I have the dehydrator on the go I am going to use this to dry the hips.  However unusually although the hips are forming locally they are not coloured as yet.  I shall have to keep my eyes open.  I tend to pick early in the season but also try and make sure that plenty are left for the birds.  You can dry them whole in the oven on its lowest heat and store the hips in a clean jar to make wine out of over the winter months as well.  Something that my Nan taught me to do.

I also have bouquet-garni to make from little squares of fine muslin and dried herbs.  tied with a cotton thread that is looped and can be slipped over a wooden stirring spoon so that you do not lose the posy in the stew or soup and have to fish it out.  If you pop it over the spoon it should be easily retrieved.

I am hoping to snaffle some elderberries later on today when we walk the dog as I want to get some Elderberry Pontack Sauce on the go for addition to soups and stews also.

There are lots of things you can do to pep up your cooking the above are just a few.  I just wish I had more time to play than I have as it is so rewarding growing stuff or taking advantage of the wild hedegrow (I grow a lot of my own herbs) and then turning them into something useful for the pantry shelf.