I have been in the garden all day long.  It has been nice to be in the fresh air.  I have spent most of the day emptying pots and washing them and re-stacking them ready for re-use.  There is so much to do but I am starting to make progress.  There has been lots of rubbish as well. Although I have worked hard you cannot really see where I have been at the moment however there is a method in my madness and by the time I am done it will start to clear all at once and later on down the line.

I am aiming for the bottom of the garden near the greenhouse to re-site the small greenhouses so that I can sow some more seeds and then put them out of the way and then clear the long stretch between there and the bottom of the herb garden .  I will then be able to put some planters there which are currently in the herb garden part and which need  more space.  I can then start working across the width of the garden.

I have quite a few plants to pot up as well including four Tayberry plants. I have  large terracotta pot that belonged to my mum and once the mini greenhouses have been moved this pot is going to go in the corner with a rambling rose I have already. There will then be some trellis behind it.

I still have the watering up and lots of washing of pots etc.to do this evening.  That will be later though. It looks as though it is going to be a long week in the garden.  I have Wednesday off in any event as I am out for the day.

We are having the roast brisket for tea tonight.  Earlier on I chopped, carrot, shallot, celery, onion and courgette finely and then placed the brisket on to the veggies which will form the basis of a good gravy.  There is also a few cloves of garlic in there as well.

Last night I also started off a tray of cress off.  With OH taking home made pack up for lunch I thought that it would perk up egg mayonnaise for his sarnies once grown.  I always used to grow this on a regular basis and more recently have got out of the habit.  The strawberries that we had for pudding last night came in a nice little tray and so I have re-used it to grow my cress in.  I shall also start another tray off in a couple of days or so in order to keep a supply on the go. 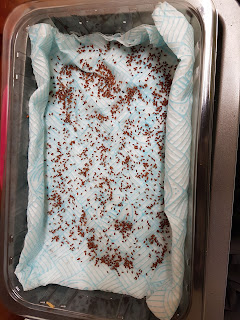 Over the next few days I hope to get some containers of salad leaves on the go as well.

Right tea beckons and I need to prep the veggies and also the Yorkshire puddings and make the gravy.

Hope you have a lovely evening.