Demetri and the Kitchen update 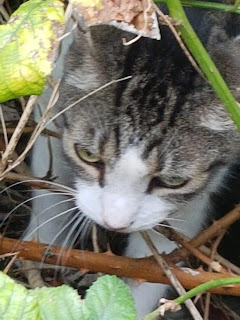 A pussy cat I took in when his owners moved.  He had lived over the veg shop with them and then moved in next door.  They then moved again and took him with them.  He came back three times.  The last time he came back someone told them that he had been run over and they stopped looking for him.  I found him living at the bottom of my garden.  He would not come to me at first but with patience, kindness and perseverance (and food I fed him daily)he eventually learned to trust me.  That was important as it was the beginning of those really bad snowy winters we had which I believe is a good ten years ago now. 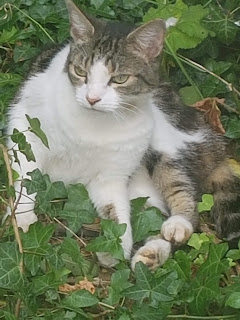 When I managed to scoop him up and bring him in, I asked OH if he knew where the lad worked.  He said yes and we then went down to where he worked to return Demetri. When OH spoke to him he indicated that they no longer had any room for him as they now had a pregnant female who was due to birth soon and very little room.  That is when Demetri came home to stay with me.

All of my cats have been highly individual.  The majority of them would come to the whistle.  Demetri no.  My only way of getting him in has been to con him scoop him up i.e. manhandle which he does not like very much.

Just recently because of the better weather he has been a so and so to get in.  If he does not come in  then he does not get fed.  Tough love that usually results in him coming in of a morning.  However I don't like any of the cats out at night.  I know its only natural behaviour but where we live is busy on the roads and I have lost too many so I prefer them in.

However in the past few nights whilst I have been sat in the garden for a little while after watering up just lost in my own thoughts he has come and parked himself on me.  The big softy loves a mummy cuddle on his own with none of the others around.  So a cautious routine has started whereby after watering up I go and sit and he comes for his cuddle for about 20 minutes and then I bring him in for the night.  I feel happier that he is in, but how long it will last for I do not know.  However Demetri is a sucker for a cuddle which is amazing really as he is such a stoical patient gentleman of a cat.  Needless to say he thinks that I am his own personal pin cushion as he pads to settle down.  All of my cats do this and Molly more than most.

He seems to like this way of coming in of an evening.  I hope it continues as I get a headache when he does not oblige at trying to coax him in.  The little devil knows as he moves out of arms length if he thinks you are getting too close to him.

I have done a load more but it is going to take me longer than I thought it would I am not going to put an estimate on it now just let it evolve naturally.  Might be best rather than me getting stressed if I do not achieve target I have a touch of decorating to do in there as well.  So maybe best this way.

Tomorrow I am out with a friend in any event but I shall continue on when I return home. I shall do some before I go out with my friend as well.

Right am off to settle down for a little while before turning in.  Hopefully I will get a better night's sleep tonight.