It has been a quiet day here today and one that has been spent low key as I have not been firing on all cylinders again.  So I have decided to take myself in hand a little bit.

That means getting myself breakfast each morning and I have myself back on the Actimel yogurts to start with to put a lining on my stomach, which I am having difficulties with at the moment. The Actimel or plain yogurt puts a lining on your stomach and is particularly good at helping the stomach process food and pills (I am on long term medication) and a lot of medications stop working as the stomach becomes sensitive to them.  I have been taken off a couple of medications for arthritis because of this. I am now on something called Hydroxychloroquinine, which is a form of quinine which works with the immune system.  It has certainly helped me a lot.  I suspect these particular issues are to do with the sliding hernia and Gord (acidosis).  If I have to bend down to do something, this can exacerbate things as well. This in turn has been impacting on some of my other conditions so I do have to try and get things back on track. I am not getting as much exercise as I was either, so once lockdown eases I like many others will be able to get out and about a bit more.

OH is not a fan of what I call a healthy breakfast.  He prefers a full fry if he can get it and I do not always oblige.  Meanwhile, I believe in a proper breakfast just not made up of a fry up.  I prefer cereals, smoothies, vitamin drinks, orange juice, a couple of boiled eggs some fresh fruit.  Something that is filling but does not overload the system.

Tonight for tea, I have had half of the fillet of natural smoked haddock served with two poached eggs and it has gone down very nicely.  I have as usual cooked my poached eggs in the milk with the fish, right at the end when the fish is nearly cooked.  It is then served with some butter and I had tonight with some wholemeal bread and butter.  Very nice it was too.

The fillet of fish (sounds like a James Bond Movie) Live and let die!

It was a nice big fillet and I have had the thick end tonight leaving the tail for another day. 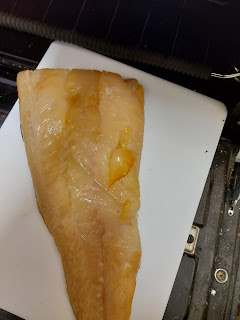 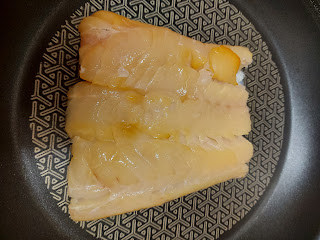 In the pan with the milk, pepper, butter. 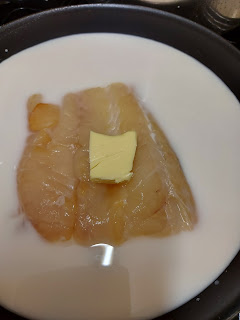 Bringing the milk to the bubble. 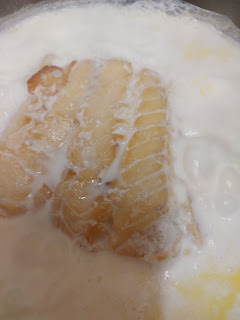 Popping in the eggs to poach in the poaching liquid i.e. the milk. 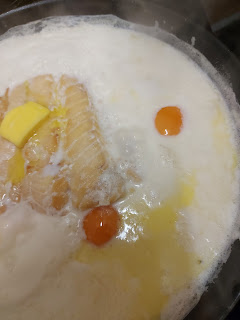 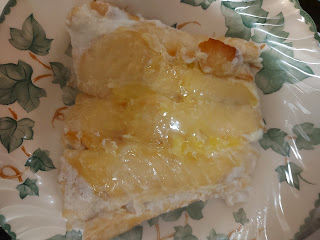 All ready to eat and it was delicious.  I had it served on the side with wholemeal bread and butter. 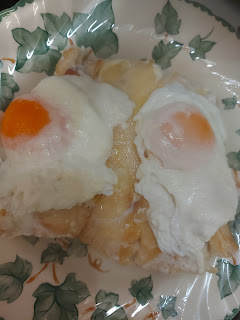 Out of the two bunches of fresh beetroot, I managed to get two large jars of pickled beetroot yesterday.  Still will not be enough for OH, as he likes pickled beetroot.  There is no sugar in so it is quite safe for him.  He eats home made pickles like sweeties.

I have also made seven jars of plum jam tonight.  More on that another time. 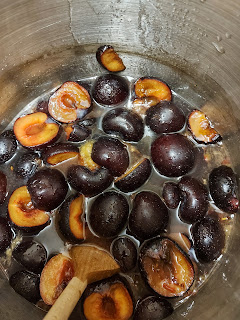 I have also made a lot of other stuff but more about that later on in the week.

I took the spinach leaves out of the dehydrator and the Kale is now in together with a load of fresh chives.  There are five trays currently on the go.  should be done by morning.

This is the big bowl of spinach leaves that have been dried.  There are about five bags worth of spinach here. 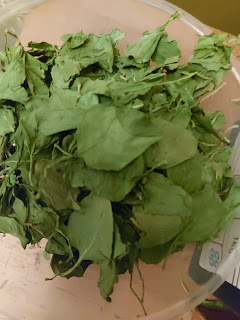 I am determined to try and use the dehydrator as much as I can putting up useful ingredients.  I am hoping to get some mushrooms tomorrow as they are also very useful.

So even though I was not 100% this morning, I have made up for it later on managing to get quite a bit sorted.  Tomorrow is also going to be very busy.