We have had a very quiet day here in Peterborough today which started off with me oversleeping. We had a parcel delivery really early and I think this is why I ended up nodding off back to sleep.  Needless to say it was not very early but the time I did get up.  We have had two more parcel deliveries since then as well.  Lets just say I was out of it.

I have pottered around on the computer a bit this afternoon.  Decided to take a R & R day for a change so not really doing much of anything although I did cook tea.

I started off by boiling new potatoes and sweet potato which had been cut into pieces until blanched.  I then drained these and added them to a roasting pan with a little oil and salt in.  I then added in chopped red onion, white onion, red pepper, yellow pepper, courgette, carrot, leek, plum tomato, broccoli and peas and also some fresh thyme.  A little more oil and salt was added before putting into the oven at gas mark 5.  I constantly monitored the veggies turning them over as they start to brown and caramelise every so often but checking frequently as you do not want them to burn. I added in the broccoli and the peas as I could not be bothered to put a separate pan on for them and it worked.  I did however keep an eye on the liquid level in the pan you do not want hardly any liquid which often appears as a result of the cooking down.  So drain this off if too much collects.  I also added in some garlic granules as well.

I then once the veggies were more or less cooked started cooking the lamb steaks in a little water with fresh thyme and seasoning covered in foil until cooked.  I made a separate pot of gravy and then served up for our tea serving with mint jelly.  It went down very well again, was tasty and warming.  Yet again this is a very forgiving recipe just using what you have to hand really.  It also saves on the washing up quite a bit.

The first plate is my plate. 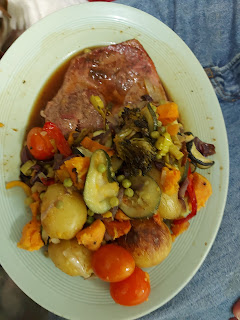 The second plate is mine. 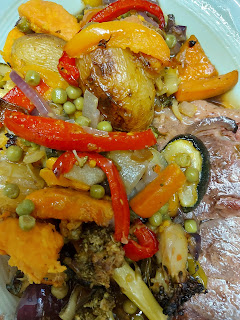 The lamb was from the new butcher and it was extremely tasty and tender.

Tomorrow we have the last of the meat the Beef joint.  Looking forward immensely to this.

I have been able to do a little more crochet on the scrap blanket again tonight.  Have started off another eight squares on the go.  Have not been able to get too just lately.

Right am off to do a little more crochet.

Hope you all have had a good evening/day.