Has sort of glided by without me doing much of anything apart from cook tea.  Tomorrow will have to be different though.  We are not going to the Fish man tomorrow as we have enough food inhouse to keep us going for at least a couple of days and we want to use up everything we do have.

Last night I used half of the chicken pack bought from the Butchers and made a Chicken Tikka Masala.  Tonight we have had home made stir fried chicken using up lots of different veggies.  It is a good Waste Not, Want Not recipe and one I make pretty regularly using what I have to hand in the house.

I have a new Stir Fry Pan which I had intended to use.  Unfortunately I could not put my mitts on it and ended up having to use my Paella Pan/Skillet.

I started off by frying half a large white onion in some oil and butter.  Cooking onion in this way brings out the flavour. 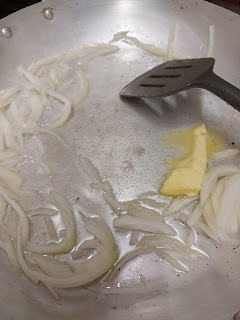 Adding in the raw chicken pieces.  I do not have the heat too high as I do not want burnt offerings and I want the food to cook gently but thoroughly. 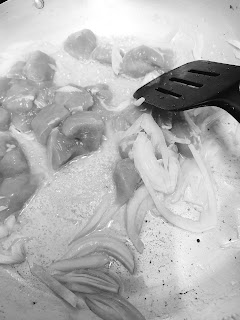 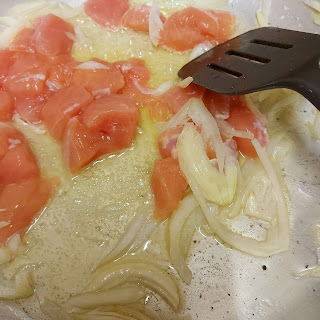 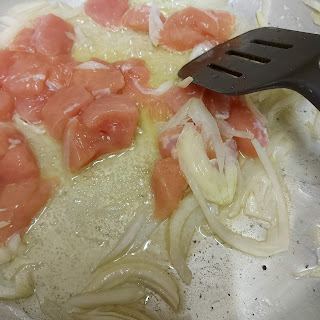 I then start layering the vegetables.  I added in a small whole red onion, one leek finely sliced, some carrot sticks that I then chunked.  Put in the ingredients by how long they take to cook. 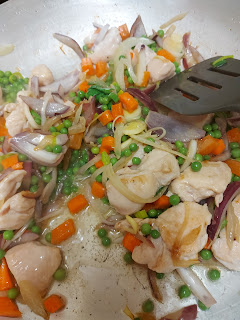 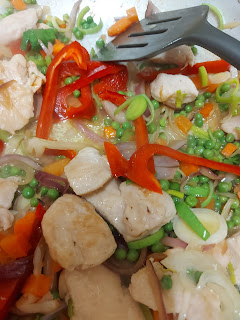 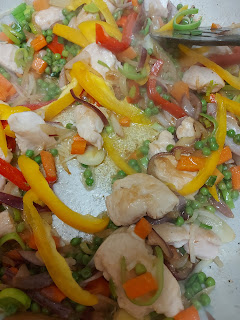 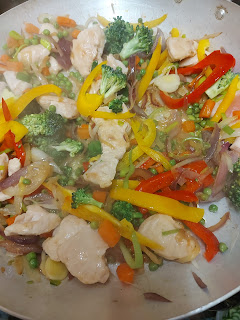 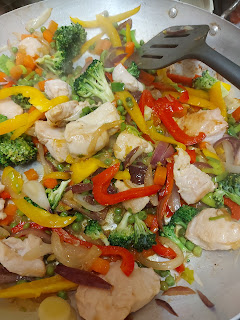 I added in a jar of sweet and sour sauce with just a little water to wash the bottle out and added it to the mixture.  Also added a small tin of pineapple in juice segmented, some stem ginger chunked, a couple of sliced mushrooms.  Broccoli, peas, 1/2 a yelllow pepper and 1/2 a red pepper were added in previously.  I also added in some Marigold vegetable powder and a stock pot, and some water.  Do not want thick but do not want thin. 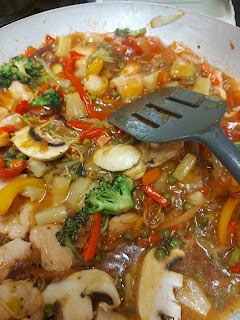 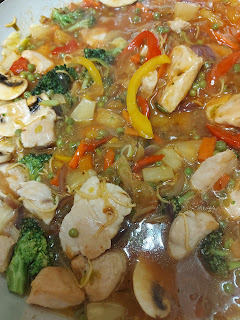 I cooked a couple of spools of plain noodles in boiling water for about 4 minutes, drained and then dished up.  The top plate is for OH and the bottom one is for me. 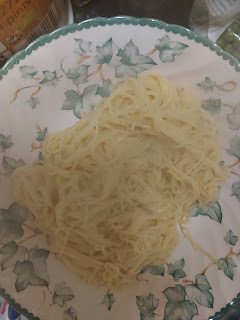 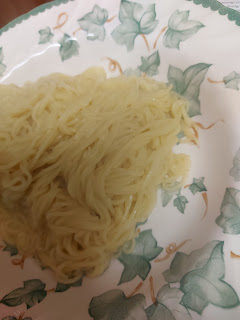 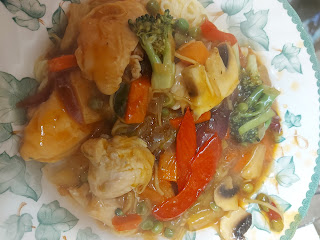 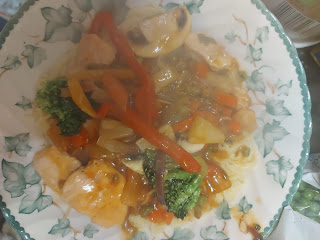 Very tasty it was too.  Very forgiving.  Just use what you have.  In retrospect I could have added some sesame seeds to the pan with the chicken.  They brown very quickly but give a lovely nutty flavour.  Could also add them with the Broccoli.  Sweetcorn is good, as are green beans.

There are lots of other bits and bobs you could use.  You could also serve it with rice, and then add to the pan at the end, adding in a couple of raw eggs and then moving swiftly with your spatula turn it into the rice until it is cooked.

You could also add Soy Sauce, sweet and sour chilli sauce on the meat,  and stem ginger liquid is a particularly nice addition.

I still have some veggies left and so they may go into a roasted mixed roasted vegetable dish for tomorrow night's tea.  We have lamb steaks for tomorrow.  Might get some courgette to go in and then roast in the oven i.e. pepper, courgette, onion, potatoes, sweet potatoes, garlic, red onion.

This cooking method is very simple, the trick is not to overload the pan with oil, and have at a reasonably high heat.  In doing this you must keep the contents of the pan moving quickly at all times.  If you have too high will scorch the contents and ruin your meal.  It is also very forgiving on quantities you literally just use what you have.  I tend to cook more than I actually need, (that's what feeding a ravenous family day in day out) did to me.  Never quite got out of the habit.  As a result there is normally always something available to eat.  I thought we were going to get second dibs tomorrow lunch time from tonight's effort.  OH has enjoyed and gone back and eaten the rest.  So it will be sarnie material mid-day tomorrow.

Right must get on - loads to do - just not settling to it at the moment.