For this evening in any event.

Before going into town to meet up with my friend for lunch I ended up adding a few more jumpers into the two chests of drawers that I moved yesterday and there are still a few more to go however I suspect they will be going into the other two chests.  I am a jumper woman and I like to feel warm and toasty rather than cold of any sort.

It was a nice brisk walk into town although my hip was giving me a little bit of bother today.  I was in good time for a change and whilst I was waiting I thought that I would nip into Waterstones the book shop and walked slap bang into my friend who as she was early also had the same idea.

We put the world to rights.  I will see her on Monday hopefully for a short while to drop some stuff off to her in readiness for Christmas. That will be on the same run to see my brother to take over Christmas bits and bobs to them.

Afterwards on my way back home I ended up going into John Lewis inn their craft department and ended up finding a reduced peg angel tree ornament kit. It will make three angels.  The price was originally £4.87 but I managed to get it for £3.48 so a small reduction.  Another small kit to add to the stash for next Christmas.  Some of them should have been finished last year but for one reason or another have not been done.  I shall put up a list of the ones yet to do shortly.and do a running progress on them. 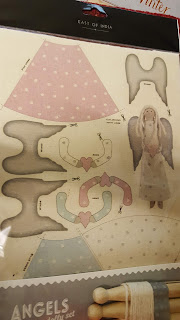 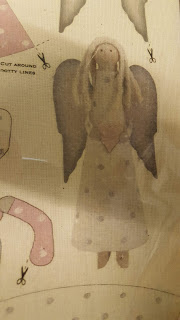 To tell the truth I bought this kit as I have seen a design for proper Toy peg soldiers that I think would look good with the games etc. underneath the Christmas tree but that will be for next year.  This Angel has a preprinted fine fabric to cut out so I thought would have a look at it and see if I could do something similar for the soldiers.