Today we have placed another order for the family for Cornish Pasties.  This time five regular traditional pasties and five cheese and onion pasties.  Yet again the order has been placed with   https://www.cornwallpasties.co.uk/.

We are also trying out a new Butcher.  No shop everything online. Stilton Butchers. Their website is Stilton Butchers.  They are also on Facebook at Stilton Butchers Facebook Photos look good as do the prices.  The proof of the pudding will be in the eating. The Reviews are very good. Apparently the Butcher's has an impeccable record locally due to supplying many restaurants and caterers.  If the food supplied is as good as it looks I may be using them again.  They seem to have quite a lot of good value packs and offers and a lot of the animals seem to be grass fed.  So will see.  They had a very good offer on when we ordered today in that if you spend over £60 you can receive a 2kg Sirloin joint for just £20.  A promotion code has to be added to receive the reduction so be careful to check your shopping basket if you order from them carefully before you finalise your order.

I ordered today some Sirloin steaks, two Two T Bone steaks, some sausagemeat (either for sausage rolls or sausagemeat plait), some diced chicken (for kebabs or curry), two Lamb steaks, two half chicken portions, two Gammon steaks, and of course the offer with the 2kg Sirloin joint.  So we will see how we get on.  Even though they are called Stilton Butchers they are based in Peterborough but there is no shop.  Apparently the original butcher's shop was opened in Stilton hence the name.

Stilton is a small village just outside of Peterborough from which the Stilton cheese takes its name although it was not produced here.  There is a pub in the village called the Stilton Cheese and I have attended the Cheese Rolling competition in year's past.  My sister-in-law used to take part when younger and I used to go along to support her.

I am a person that normally likes to see what they are getting especially with food and so thus far I have been a little suspicious with the pasties - (my fears were calmed on this one though by the previous delivery)  I am hoping that ordering the meat this way will also prove successful.  I never go back to a place where I am not satisfied with the quality so we shall see what happens.

Everything I had planned to do went awry today and I ended up giving in somewhat disgracefully to re-convening everything I had planned for tomorrow. OH had to go for a Diabetes check up today as well and then we had something blow up that we had to deal with which took longer than anticipated.  Needless to say I was not impressed.  These things are sent to try us.

It has been a milder day again here in Peterborough and the weather forecast looks as though we are going to have a spate of more mellow weather.  Fingers crossed it stays that way.  The sun has been out and that always makes me feel better.

I managed to do a little more crochet last night as well and I am glad that I added the yellow in.  It is right for this blanket.  Especially as an odd ball of wool I had which I thought was navy has a purple hue to it as well so it seems to be ideal for it.  It reminds me of primroses and violets. Two of my absolute favourite Spring flowers. 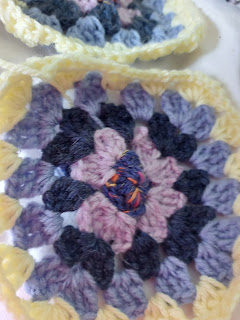 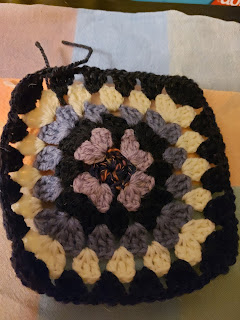 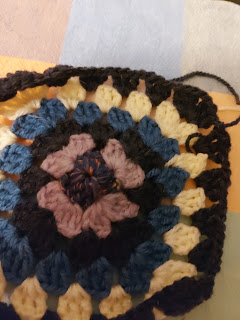 OH has just come in from walkies with Missy and handed me three blocks of cheese.  It is a mature cheddar cheese which has been on an offer at the local Co-Op.  We decided to give it a try and it is quite tangy and not too bad at all for the price.  Known as Worthy Farm (Glastonbury) Reserve Cheddar.  It is about £3 for a 320g block. I have since found this round the corner at £2.50 per block. 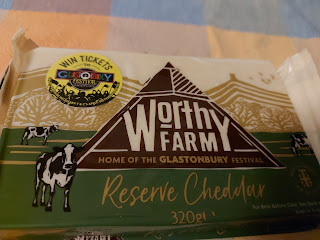 I might go and get some more as I quite fancy some cheese scones for a change and maybe a cheese and onion pie.

I also paid a visit to the veg shop as I wanted some cooking apples to bottle up for the pantry shelf. I have 5kgs x £2 per kg to peel.  Whilst there I came across a bargain in the reduced section, Seven x one pound punnets of cherries.  They will either make jam or pie filling.  Not sure yet what I am going to do.  Might be the bottling of pie filling.  Might be cherry jam.

No matter what I do it will be useful preserves for the pantry shelf.

I have also bought two more bags of frozen veggies to dehydrate.

I am going to try and do the mixed fruit jam tonight with the fruit out of the freezer.  I have 2kg to use up.  In the fridge but am intent on not wasting it.  I am going to add a few cooking apples to the mixture as well.  Will be lovely with croissants for brekkie.  This is one of the bonuses of keeping quantities of fruit in the freezer as when you have more time you can easily rustle up (under normal circumstances) preserves when you need them or have more time to make them.

I was a bit b***** about not being able to do my baking.  Maybe will get there tomorrow. Had written out all my quantities as well.  Strangely when I bake it is the measurements I have the problem with.  The actual process of making the item in question I always remember it is just the quantities.  I had planned on doing bread as well.

Right am off to get that jam done.

So lots to do over the next few days.  All created by mois!