In other words having a good nosey into bags and boxes in the back bedroom that I haven't looked at for ages.  Finding kits and wool that I had forgotten that I had bought and my fingers getting itchy as a result.  I have been disciplined though and am not starting anything else until I have the current projects i.e. my cross stitch and embroidery Christmas lap quilt, my decoupage project box and my scrap wool blanket (unless of course I come across a small UFO project that can be finished quickly).  I have not done anything on the lap quilt for the past three evenings but intend to get stuck in again tonight. It has been giving me a lot of pleasure in being able to work and focus on this and I have missed working it.

My finds today were some extra large men's shirts, bought for general crafting and also for doing some patchwork.  You get about a metre of fabric out of a man's shirt for about £2 to £3.  Bargain. 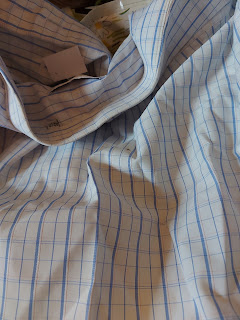 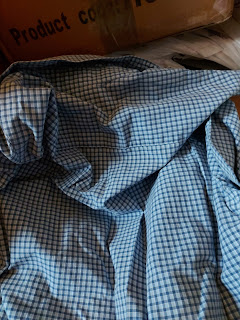 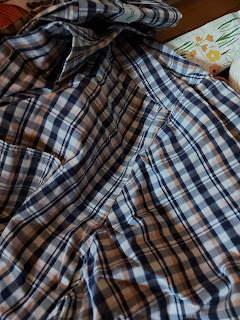 These once cut down will be packaged into small bags in readiness for using for patchwork primarily but also other projects as well.

Here are some I have prepped beforehand. 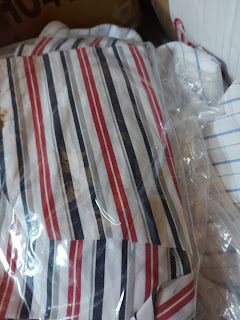 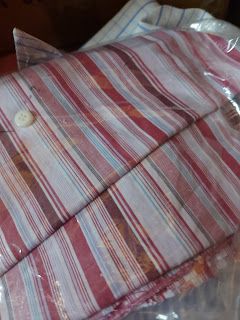 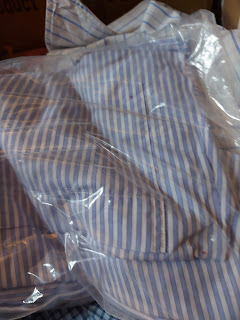 There are quite a few packs of this.  Think it will be when OH goes fishing or is allowed fishing before I will be able to get to the sewing machine.  Something I am looking forward to as like to use the machine and I still need to learn bits on my machine in any event.

I also found a load of Aran wool that I had forgotten I had bought.  I already have a load of cream in the back bedroom elsewhere.  I had bought pink and green.  I think I had bought this for a crochet blanket. 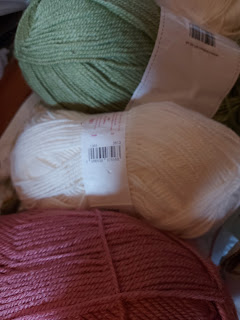 I also found another couple of kits.

The first is a Christmas sampler and the second is a scenic view.  There is a lot of embroidery thread in this kit.  That might be the next new project after the Christmas lap quilt has been completed.  We will see. 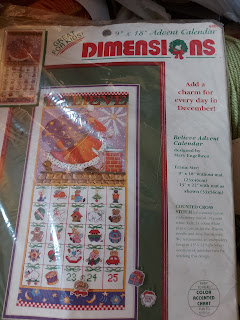 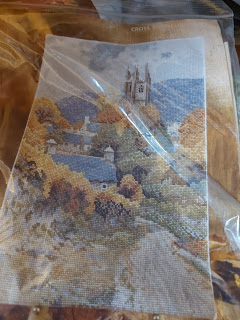 I also spent some time sorting through a previously started kit; I think I have lost some of the threads somewhere.  They will be in the backroom just not where they should be,  It will be like finding a needle in the proverbial haystack locating it; however am sure it is there somewhere.

We were going to have roast beef and all the trimmings for tea tonight but OH is not really hungry so that is being postponed until tomorrow. I am not that hungry in any event - for the best part we eat very well and I know that we are lucky, but I like simpler food too.  OH is not enamoured of my choices but every so often I rebel and have something to eat that I like.  Take for instance last night I had chicken and chorizo Tortellini in Tomato and Basil sauce and it was lush.

The weather has been cold and extremely windy (plus lots of rain) which I have not been too impressed with as its too cold to go out to play.

I have just looked at the clock and just do not know where the day has gone.  That's because the clocks were sprung forward this morning.  Will take me about a week to get used to this, but I do like the lighter evenings.

Right am off to do some embroidery.