The Spring Equinox today and the day has been dull, slightly warmer but still chilly although the nights now seem to be stretching out that little bit more each day.  Next weekend we put forward the clocks so our evenings will be even lighter.  The sap is rising, birds are nesting, trees are starting to shoot.

And me I am looking to the wild larder for stashing away some goodies. I am after nettles and garlic with which to make goodies for the pantry shelf but so far have been unsuccessful.

Nettle tops are traditionally eaten at this time of year as during the winter months traditionally in this country we survived on salted meat.  The nettles helped purge your system of any toxins not just salt and gave your system a good clear out.  I want to make nettle soup, and wild garlic pesto and dried ramson leaves, as well as nettle green powder and dehydrated nettles for future use in teas or in green powder form.  I also want to make wine.  I know that my grandfather used to nettle himself down in Spring, to help prevent arthritis.  There may be something in this as bless him he never had arthritis but the rest of us have!  Will have to keep looking.

Today OH has also treated us to what are called three pillar trees, (I think they are similar to what was known as a Ballerina tree which we have two of in the garden).  He has purchased a cherry a pear and an apple for the garden which I was very surprised at but pleased.

Then he ordered another cheese box from the Fine Cheese Company in Bath, the company we ordered the cheese from at Christmas.  This time we have ordered

The "Spring for the moment". Should be delivered on Tuesday. Some very different cheeses we have not tried before. Golden Cross a raw Goat milk cheese, Baby Baronet made from Jersey milk, Beaufort a raw milk unpasteurised cheese made in the French Alps, our favourite Gorgonzola Al Cucchiaio a very soft Gorgonzola that you have to use a spoon for, and Lypiatt which is a cows milk cheese based on a goat cheese which is apparently ashed to finish it. Five cheeses only one of which we know. Should be interesting. 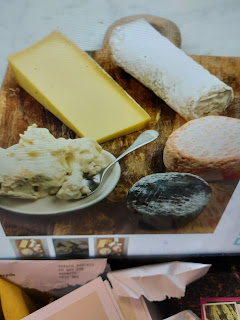 Today I have not been firing on all systems again I think this time round it is a matter of too much sleep but I am hoping things balance themselves out slowly.  I suspect though I am going to have to make an appointment to see the GP if things do not improve shortly.

OH went to the Baker this morning and then slipped off to see the Fish Man without me!  How dare he.  However as a result he did come back with some goodies.

We have seafood platter tonight with a fresh Cromer crab each and then he has Crevettes and I have Crayfish with some crispy buns and butter.  It was extremely yummy, just served simply with some crispy buttered buns which were bought from the Baker. 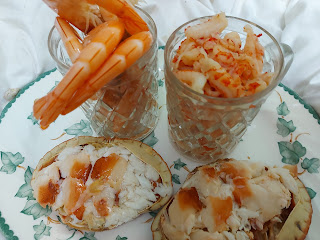 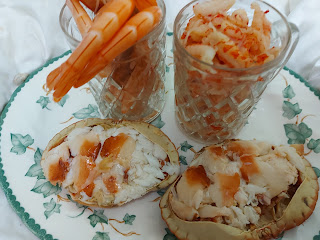 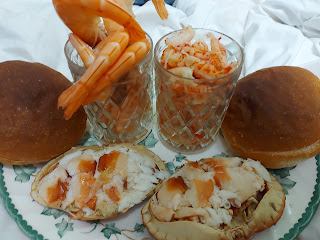 He also bought home a couple of Plaice which we will probably have on Monday.

Tomorrow we have a roast chicken for dinner with all the trimmings.

This evening I have been at my embroidery again.  I am determined to get this one completed.