Spring is on the way

Well today we have had the promise of Spring.  It has been a beautiful day and we have had some of the windows open to let in fresh air.  It has been warm in the sun but chilly in the corners.  OH wanted me to venture out on the dog walk today.  I declined on the basis that I felt cold.  It is warm in the house but I had already felt the change in temperature and knew I would be cold if I went with him on her constitutional so rain checked it to another day.

Today we had boiled eggs again for brekkie.  I think OH is developing a fetish for boiled eggs!

I have been pottering doing things around the house for the best part of the day.  I did get chance to sit for an hour or so on my crochet again which I was pleased about.  That is another four squares sorted.

I also have more stuff in the process of being preserved, all prepped up, ready to make.  I will start to pop the posts up on what I have made thus far in the next couple of days.  It has been a bit full on and there is still a lot more to do.  I am not wasting an opportunity this year.

We have had a repeat of the delicious dinner that we had yesterday. It was just as tasty and there are about another three meals worth of meat left.  It will get used probably in sarnies and a stir fry.  However for tomorrow we are having gammon steak with pineapple for a change.  Something quick that will allow me not to loiter in the kitchen cooking meals too much tomorrow.  Loitering in the kitchen for preserving comes under a different heading.  I also have my steam canner to get on tomorrow for my apple sauce as well.

I still have not managed to get my net of onions.  The size I am after they have not had for a few days but are due new supplies in which means I will also be able to get some onion chutney and marmalade underway as well.

I managed to pick up some chillies (thinking chilli jam here) and four bunches of asparagus today.  The asparagus us going to be dried and then I am going to make up my own Rissotto mixes.  I have in the past bought Asparagus Rissotto made up in this manner and it is delicious.  Need to blanch the asparagus first though on this one.  Can also be used as a green powder.  The bunches were 50p per bunch so for £2.00 I have four bunches of asparagus.  Every little helps as they say and I am determined to get as much vitamins into us as I can.

By accident I also found a bunch of Daffodils that had been forgotten  and had dehydrated naturally.  When I looked the flower heads were almost perfect and so I have nipped them off and intend to use them in a home made pot-pourri later in the year.  I have a whole host of material I need to collect for this.  These are not edible and as I have indicated will only be used for home made pot-pourri to decorate the top of the basket once it has been steeped. 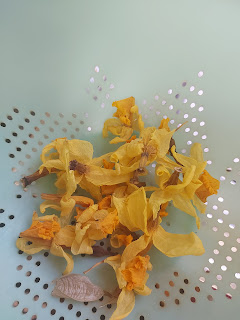 I also have Lemon Marmalade on the go as well.  Just at the prep stage so far, but that will be completed tomorrow.

I also intend to make Lemon Jelly Marmalade as well.  The prep for that will happen tomorrow but will not be made until the following day.

Right must up and away.  Want to do a little more crochet before retiring for the night.