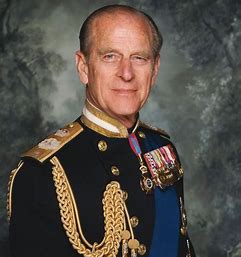 Very sad news yesterday of Prince Philip's passing.  Thank you for your selflessness and service to this little country.  May you rest in peace sir.

I met him as a little girl.  I would be about five to six years old at the time.  The Queen paid a first visit to the Junior School I attended and we had been pre-warned how to behave when the Queen arrived and much was made of her visit.  No one mentioned the Prince though.  I with my peers were trying to see the Queen doing walkabout outside of the school and this gentleman stopped and started talking to me about whether we attended the school and how long had we been there and various other questions.  Mum who had my brother with her as he was not of school age was over the other side of the street and was quite chuffed.  Needless to say when I got home there was an inquisition as to what had been said and what had not. I had not really known who he was at the time and shrugged the conversation off as if it was a mere day to day occurrence. What struck me though was that he was friendly and liked talking to children and he was genuinely interested in what we had been doing at the school and in what we had to say.  He was lovely to a shy child (namely me) and that is a memory I will never forget.

I am sorry I have been absent for the past couple of days.  I have been a bit under the weather and have had to revisit one or two issues regarding my health.  I have a couple of new regimes in place and so I can only try them and see if they work in the long term.  If they do not then all I can do is tweak them and try again.  Some of the strategies in place are to drink more water than I have been doing and getting away with the odd drink of pop as much as possible; setting my alarm for medication in the afternoon, and changing the size of my meal, trying not to eat later in the day and to make sure that my bed pillows are higher than they have been. Every so often I tend to get glitches - either something sets them off or my system just does not co-operate.  I am awkward.  I have been resting up though as one of the things I have found out is that if my system is upset it tends to trigger off the fatigue attacks.  I believe that this may be something to do with the fact that when there is inflammation in the system it tends to trigger the body going into overdrive to protect itself.  In other words my system attacks itself. (the main culprit for this is a condition called Sjorgen's Syndrome).  So I am doing my best to remain inflammation free (although you cannot always manage this).  Today has been the first day in ages where I have felt more like my old self and have had a bit of energy.  I have been in bed earlier and I have been eating lighter meals so hopefully this will all assist my system in the longer term.

In any event, I have not done any embroidery for the past week.  Perhaps that is part of the problem!  So there will be no post relating to that this week as it has bee a non event unfortunately.  Hopefully that will be remedied tomorrow evening when I am hoping to get stuck in again.

On Thursday we received a delivery of pies from a company called Wilfred's Welsh Pies (Lewis Pies).  We had four varieties of pie arrive Chicken, Pea and Asparagus, (which is self-explanatory), Gower Cwtch, (Steak and Leek with a touch of Horseradish), The Saucy Cow (steak cooked in Ale). Steak and Perl Las which is a steak and Welsh Blue cheese).  These are some of the nicest pies we have ever had with them being full to the brim with tender meat and accompanying ingredients which are very tasty.

They arrived in eco-friendly packaging foil covered and ice packs in situ which I can in turn freeze and use again.  Will be especially useful for OH if and when he goes fishing and also for taking stuff to the caravan and keeping food cold until the fridge fires up that we have in the van.

The first two photos show the box they arrived in and how well they are kept cold. 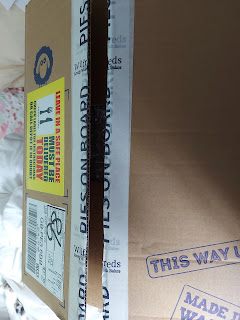 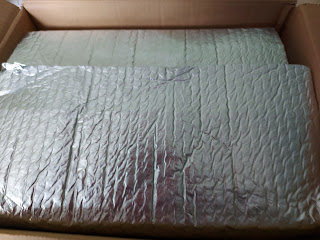 Separate boxes with the different pies in each box.  We irdered 4 to a box as these varieties were on offer.  All the pies are individually named so that there is no confusion as to what variety they are. 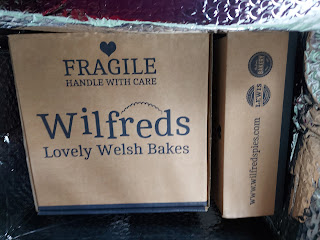 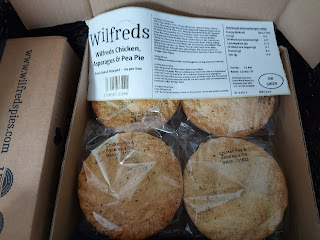 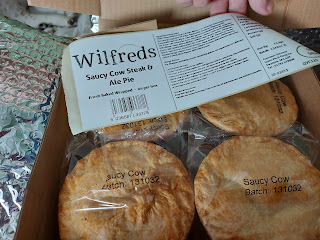 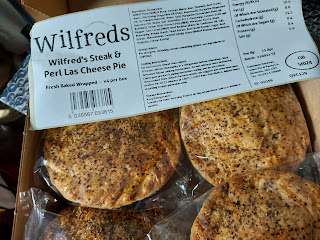 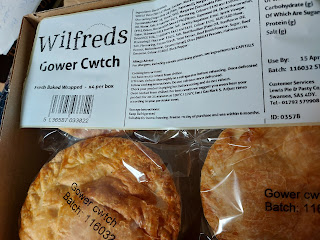 This is how deep the pies are.  They are a generous size. 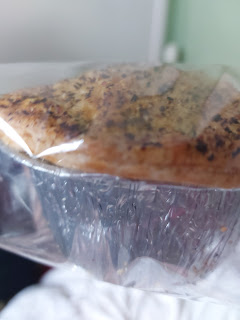 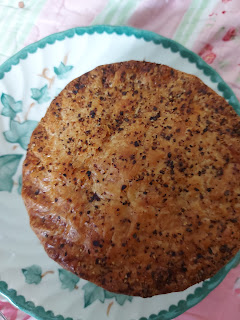 Lots of tender, lean and tasty meat inside the pie case. 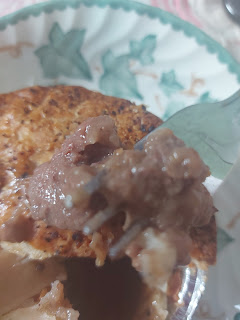 This is not an advertisement, just something that we have found and have liked very much.

This evening for tea in light of the new regime with food, we have had a spaghetti Bolognese.  I have cooked less than I normally do as well (it will do neither of us any harm). 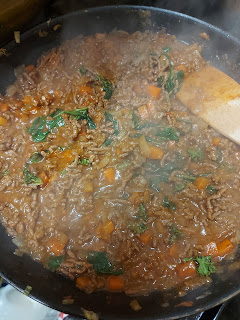 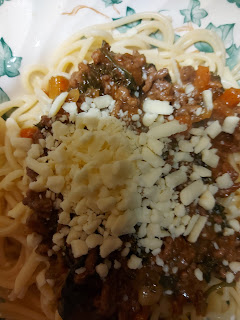 There were lots of vegetables in the sauce, fresh tomatoes, carrots, onion, celery, fresh spinach and dried kale.  It was very tasty.

I also received an invitation today from the GP Practice to book my second Covid 19 vaccination.  I will be having this tomorrow at about 12:50pm.  It will be good to get that out of the way with.  This is for the Pfizer vaccination.  This time round I have been invited in before OH.  He had the Astra Zeneca so whether they do not have enough stocks of this at the moment or not I am not sure, but OH had his first jab about seven days before I received mine in February.