The Day After Monday

After a very uncomfortable night, and eventually dropping off to sleep, I woke at 6:30am and promptly dropped off back to sleep again.  There was no hurry to get up and so I have taken the time out to rest up a little and showing myself a little TLC.  I do not have the pain now, and I had taken some Ibruprofen but was told categorically by the Medical Assistant to keep away from Ibruprofen at all costs.  I am to stick to paracetamol.  I am sore today but a lot better than I was last night.  I bought new jeans last year and they were a size smaller than I used to be.  However since lockdown, I have put on a little weight.  My logic is that maybe this has something to do with it as well.  So me eating only what I need may be a good way of getting rid of those few pounds I have put on.  I am also going to start walking again into town to get a bit more exercise as that is how I lost the weight before.  It does not help with OH now being retired as he is here near enough all day and in some respects expects at least one meal a day if not two.  However, I have told him that we have to cut back a bit as it is not doing me any good.  Not that I each as much as him.  I tend to dish things up but then not always eat them.

I have some dehydrating to do after yesterday's foraging trip so have plenty to do but fortunately compared to a lot of things this is relatively easy to accomplish.  It will be good to have some different supplies to hand.  I will be going back later in the week as there are lots of goodies I want to make.

I also cooked OH "Brunch" very much a man's breakfast/brunch meal.  It included bacon, chipolata sausages, fried field mushrooms, fried eggs, fried Fruit Pig Black Pudding, Fried Fruit Pig White Pudding.  My stomach was not up to this but he soon polished it off.  The Fruit Pig Puddings are the puddings we bought via Craft'D that arrived the other day. 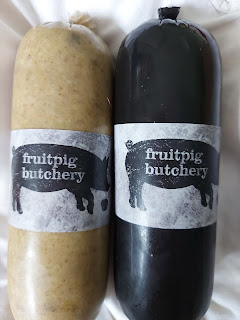 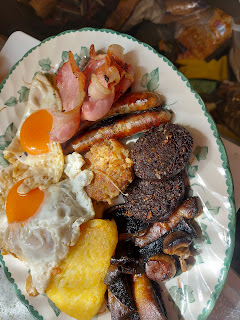 I found a new recipe which used sourdough bread which had been toasted (I did not have sourdough today and so I substituted this for two slices of standard bread) which had been toasted and buttered, with scrambled eggs on top and then dressed with chopped wild garlic which I had not had before and it was absolutely delicious.  Something that I will definitely have again.  Needless to say will be going back to get more goodies out of the hedgerows and I will certainly be freezing some of the garlic leaves and stems.  Will be very useful within the current year and if I make enough might last me all the way to when it is in season next year. 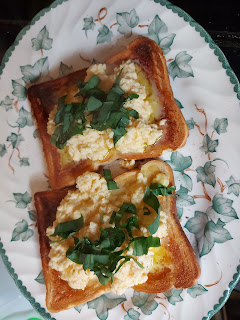 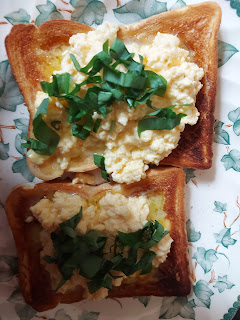 Hopefully will get all the drying sorted out and then onto the wines and cordials.
I have been rooting around the internet a little bit today and have found several more projects to add to the list of to do's or things I want to have a go at again or things I have never attempted to do.  It is best to be busy overall.
Am off to bed now.
Catch you later.
Pattypan
x
Posted by Pattypan at 3:32 pm