Something on the Needles - Jumper Update

I apologise in advance to those of you who are not into crafts of any sort, for a double dose of crafting posts today.  Hopefully will be back to "normal" soon.  Too many other things going on in the background.

It has been a really busy week here; working in the kitchen, trying to get the cupboards filled with essential equipment and sorting out the other items to be stored in the under-stairs cupboard, which have since started to do but is still work in progress.

As a result I have only managed to get to do some knitting twice this week.  However the jumper is growing I am now on the front and nearly to the point where I start the arm hole shaping. (not the first picture this was just after I had started the front of the jumper).  So not doing too badly considering. However, I am itching to get stuck in again.  It seems to help my hands a lot. 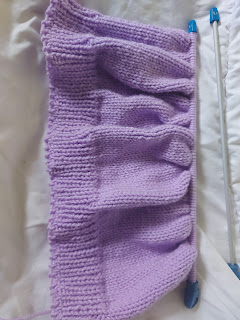 Maybe this week I will fare a little better than I have thus far this week.  However in fairness there has been a lot going on at home and there is likely to be a lot more that needs to be done in the coming fortnight, as well as making seasonal items and prepping forward a bit on other interests.  More of which I will mention in posts yet to come. 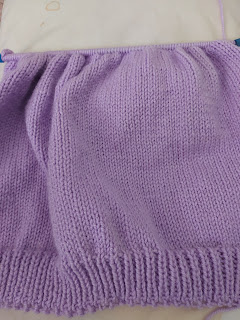 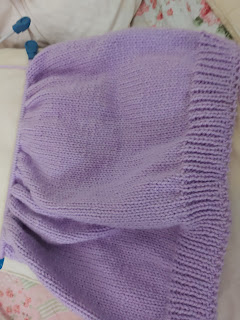 So still a fair way to go, but hopefully will be able to get the front done by the end of this week.  That is if I do not get too bogged down with the Cats Cradle/Spaghetti junction mess of wool I am trying to sort out.  In fact, I might knit tonight and face Spaghetti Junction tomorrow night, so that both projects move along a little bit.  A little every so often is better than none at all.

I am determined at least to carry on some form of knitting even if it is only the blankets.  I have found that since I stopped work my fingers are not as supple as they used to be (I used to type all day long) so the knitting does help quite a lot.  To boot I am hoping to have some jumpers out of it as well.  I am slowly starting to address my Nemeses, knitting being a major one and pastry another.  There are others as well, but will get there in the end.