The Front Bedroom and Clothes Closet Part One

For the past few days I have been esconsed in the front bedroom trying to sort it out as it has been used as a bit of a dumping ground recently and therefore long overdue a shake up.  Bearing in mind my intention for an early spring clean before we start going off on our travels again, now is the time to "strike whilst the iron is hot".

I have therefore worked my way through to the cupboard in the bedroom which was originally the airing cupboard, but since the new boiler has now been sited upstairs in the smallest room and we no longer have a copper hot water tank, the airing cupboard has had a couple of clothes rails added in for storing shirts, blouses, jumpers that sort of thing and turned into a small closet wardrobe.

As it has been a little while since I was able to gain access I  have thoroughly scrubbed the cupboard out, and I have washed all the clothes that were in there as well, to make sure that there is no dust and that everything is presentable for wearing again.  I had not realised I had so many tops!  In fairness I have sorted out a heck of a lot of stuff for the charity shop, some of which will be dropped off tomorrow.  The walls have been washed down in the closet, and now I have to get the carpet vacuumed in there. 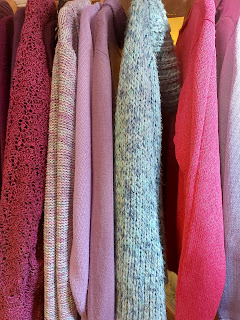 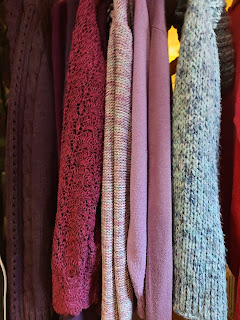 I now have to get all the clothes back into the closet and add in a tower of drawers which I had already purchased for popping in such things as make-up, nail varnish, belts, scarves that sort of thing so that they are pretty well easily findable from hereon in.  They have been in a couple of chests of drawers I have in the bedroom, but that space is now needed for jumpers and other bits and bobs, so they will be better in here out of the way, and kept tidy.  I will also have my hair styling accessories i.e. curling wand, hair dryer, etc. in here also out of the way.

This has now been completed.

I do have a couple of enamel hanging hooks to pop on the wall as well as a mirror.  I intend to pop into the cupboard on top of the drawers, a lamp as there is no lighting in the cupboard.  This does make it very difficult to see what is what as I tend to colour code my clothing in blocks of colour which is also meant to make things easier to find. There is also a high shelf in the cupboard and I have popped up a plastic lidded crate and have popped all my handbags in there to keep things nice and clean.

I do wish to paint out the cupboard at some point to freshen it up, but that will not be now, not with all the work going on with the clothes.  At least it has been scrubbed out.  I shall when the room is tidied, empty all the clothes out of here and then paint it out properly in order that it has a couple of days to dry out before being re-filled again.  I do not want paint on my clothes.

I also in my bedroom, have two bedside chests, four chests of drawers, (ones from my childhood that were double stacked and two others that stand side by side and the tops used as a double dressing table) a dress jewellery cabinet, a hanging rail, two large pine wardrobes, a Superking bed, a wall bookcase, my pine rocking chair and a blanket chest.  So there is a lot of furniture in there.  I also have two large bedside lamps.

After the closet has been completed for the time being, the next to be sorted out will be the blanket chest.  This currently has a lot of stuff in it and really needs sorting out.  Any items that are no longer required can then go to the charity shop.  This, should in theory, free up room for other items, including a couple of large quilted quilts and bedding.

The blanket chest has an interesting history.  It actually belonged to family friends who used it for many years as a blanket chest in their own bedroom.  I believe Peg used to store her handmade quilts in it (Peg was a patch-work enthusiast but never used a sewing machine.  Everything was made by hand).  They donated it to my Dad for his study.  Dad was big into photography which was his main hobby, and the chest is where he used to store his photographic equipment at one point.  It was then passed on to me, and has been used for its original purpose ever since.  For me the important bits with items and things is the stories associated with them.  So many memories and so much love.

The chest itself is made of panelled pine.  Dad put a dark stain on it but I shall at some point in the future strip it down and get it back to a lighter colour as most of my furniture is light coloured pine.

I will then once I have all the clothes back in the closet start on the first of the pine wardrobes which holds all my shoes,  boots, dresses, capes, and skirts.  Some of the shoes have already gone into the bag for the charity shop as they are far too small for me these days.  After having foot surgery on my bunion joint I went up a size in shoes from a size 7 to a size 8, which has meant that a lot of my lovely shoes have had to go. I for the most part wear flatter shoes these days, but I do miss having a little heel on a shoe, but I cannot always cope with these nowadays. The charity shop will do well out of it though as will my cousin.

Tomorrow is another day.  Hope the first big wardrobe gets sorted out tomorrow.  However, this time I am not washing the contents they will be done later in the week.